The main difference between these two types of softball is the pitching style. The type of pitch required in each game greatly influences the rules; and changes gears that the players must wear.

Here are the Basics of the game. 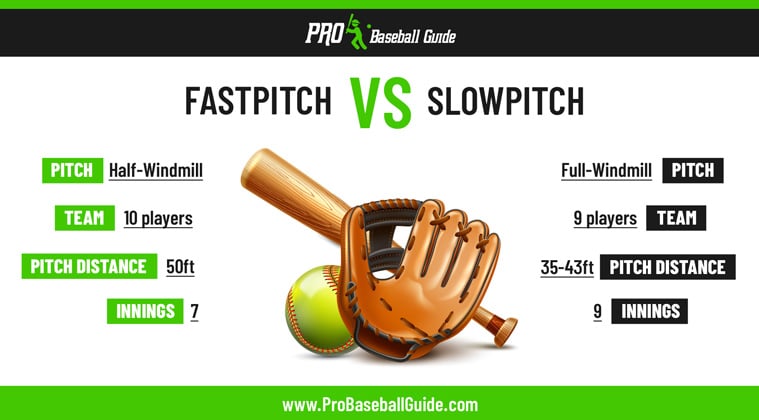 As you can see, the type of pitch dictates every essential component in each game. One other quick difference is, in Slowpitch softball, there are only two kinds of pitches, the underhand and slow. On the other hand, there are several ways to throw the ball in a fastpitch game, making it much more complicated.

Overall these are the main differences between fastpitch and slowpitch softball. Now, we’ll discuss each difference to help you better understand and learn which type of softball better suits your style.

As we’ve discussed above, pitching is the main factor that differentiates slowpitch vs. fastpitch. And as the name suggests, the fastpitch aims to create a throw that produces faster speeds. In addition to that, fastpitch softball involves a more complicated pitching style. It requires excellent skills and talent; that’s why older players mostly play it. 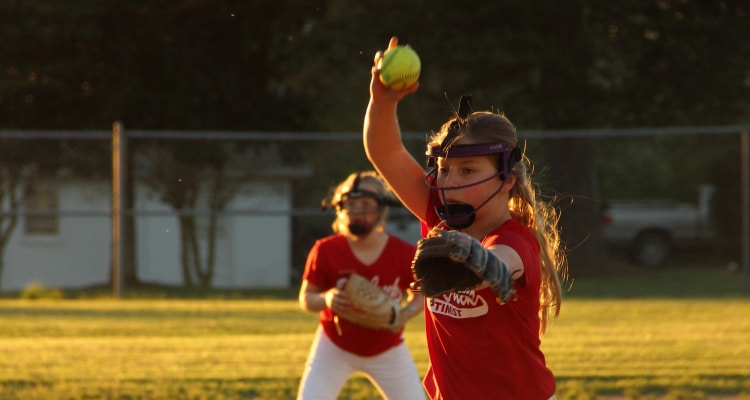 Fastpitch became very popular in the US during the ’30s and ’40s because of the ‘speed’ factor involved in the game. Because the fastpitch softball features competitive and hard-to-hit underhand pitches, it became the main attraction in US televisions. In addition to that, the adrenaline rush makes this sport entertaining for softball fans and spectators.

How to Throw a FASTPITCH softball?

The fastpitch softball makes use of the full-force “windmill” throw and requires that the shot be delivered faster and straighter. To throw a fastpitch, players start at their hips and rotate 360 around the shoulder, shooting the ball toward the hitter.

Because of the high velocity, the pitching distance is at 35-43 ft., which is much shorter compared to the slowpitch throwing distance. There are several types of throw types, but most players aim for the two-seam and four-seam fastball, curveballs, and screwballs to deliver a strikeout.

On the other hand, slowpitch softball is the most common type and more popular sport. It is a game usually played by younger players and co-ed athletes. That’s because it is easily accessible and doesn’t even require any training or practice.

In the mid-50s, fastpitch became a more popular sport for women. And because it’s more entertaining to watch women playing fastpitch, men’s teams started switching to slowpitch. Because there’s a larger fielding, this gave them a chance to amaze the crowd with more brutal hits and longer shots.

How to throw a SLOWPITCH softball?

The slowpitch throw makes use of the half “windmill” motion. To start, hold the ball using your dominant hand. This pitch starts at the hip. Swing backward up to the shoulder, wind the ball forward and upward and release the ball quickly with enough force to reach 50 feet. The tip to avoid a strikeout is to create a high arc to reduce the speed of the ball and prevent a powerful hit. However, it is imperative to remember that pitchers should throw a softball pitch in a 6-12 foot arc. If the pitcher fails to meet this condition, the umpire may consider the pitch illegal. 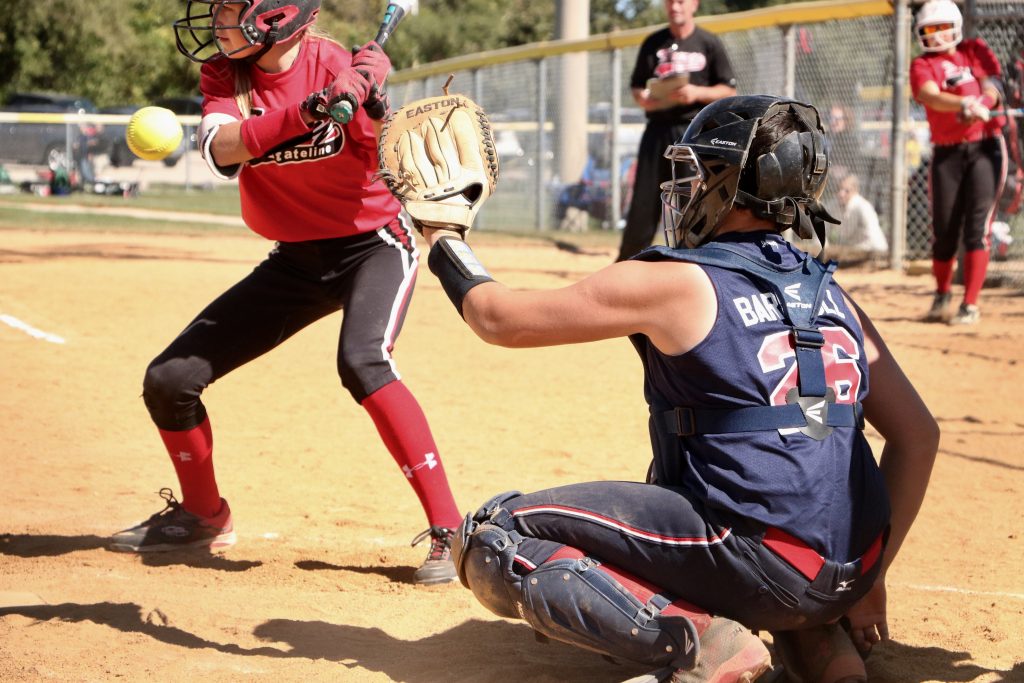 On the other hand, slowpitch softball, also known as lob ball, came into the limelight in the early 1950s. While fastpitch softball depends on the prowess of a skillful pitcher that can pitch with extreme velocity and complex ball movement, slowpitch softball encourages the batter to hit the ball with sheer force and put the weight of the game to the defensive team. In a nutshell, fastpitch softball plays will depend if a batter can hit the ball and strikeouts, while slowpitch fastball games ensure the ball is put into play, forcing the defensive team to make strategic fielding plays and generating outs.

Aside from the difference in pitching style, both slowpitch and fastpitch conduct their game in similarly sized fields. However, the number of players for both games significantly affects how teams play fastpitch and slowpitch softball games.

In fastpitch softball, the game requires nine players in the field, including the pitcher and catcher. Moreover, the rule of fastpitch softball is closely similar to the rules of traditional baseball games; therefore, both games employ identical strategies. In addition, fastpitch usually is a single-sex sport.

In both games, the defensive team must stop the ball hit by the batter to prevent offensive players from advancing and scoring runs around the bases. There are six positions in the infield and four positions— three if it’s a fastpitch game, in the outfield.

Both fastpitch and slowpitch softball games have their unique pitching styles—this difference in pitching results in both games having a relatively different pitching distance.

In a fastpitch game, the pitching distance is at 35-43 ft to accommodate the high-velocity throws of the pitcher. In addition, this distance lets the pitcher send the ball at a sharp angle. Conversely, in a slowpitch softball game, the distance between the pitcher and batter is at 50ft. This distance enables the pitcher to send the ball within an arc measuring around 6-12 foot in height. This arc-shaped pitch gives the batter enough time to hit the ball correctly at an upward angle. 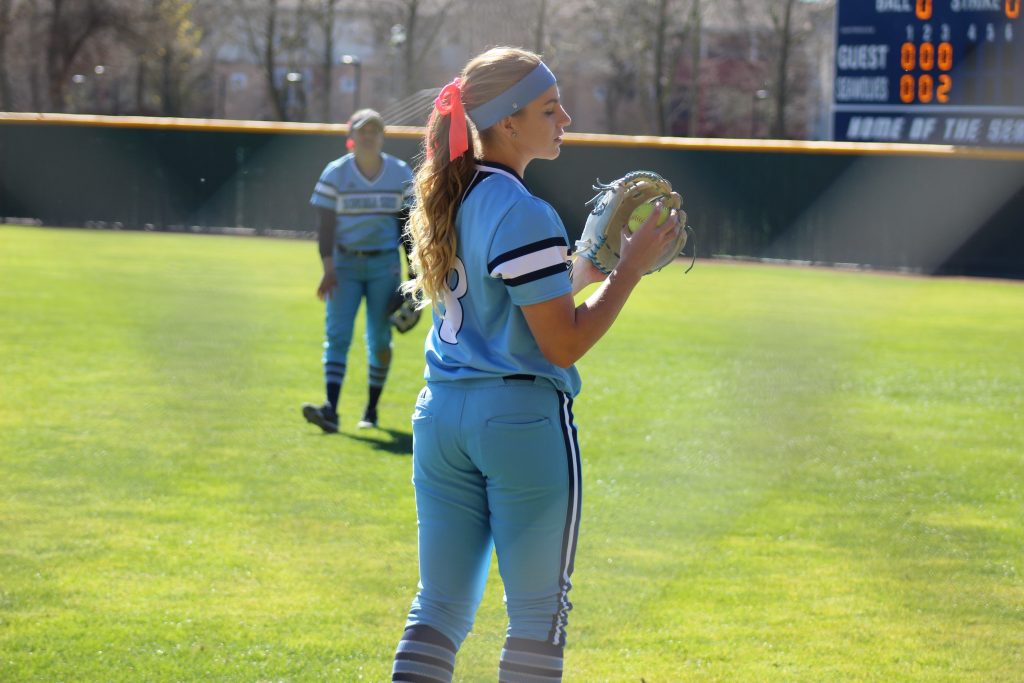 Both fastpitch and slowpitch are softball games, but the strategy used to win the games varies greatly.

In fastpitch , the speed and manner softballs are pitched make a different set of rules and strategies to win the game. Since fastpitch games require pitchers to make fast and deceiving pitches, the game utilizes offensive tactics such as strikeouts and bunting to gain leverage against the enemy team. Since batting the ball is relatively more challenging in fastpitch softball games, strikeouts and base stealing are typical plays employed by teams.

On the other hand, in a slowpitch baseball game, a batter is required to strike the ball at an upward angle. In addition, pitchers in a slowpitch baseball game need to lob the ball towards the batter in an arc measuring 6-12 ft. This rule forces the ball to constantly enter the field on every pitch, emphasizing the defensive play generated by the fielders. In a slowpitch softball game, the rules cause the defensive team to make strategic and decisive fielding plays since it is easier to pitch the ball in their game.

All defensive players wear a fielder’s glove that enables them to stop the ball efficiently. Furthermore, each glove contains specifications that help each defending player to play their position better. For example, a pitcher’s glove is designed to hide the pitcher’s throwing hand to throw off a batter’s ball prediction. In addition, these defensive gloves also double as a piece of protective equipment since it is dangerous to catch a high-velocity softball without catching gloves.

The catching gloves are an essential part of the game, allowing players to make catches that are impossible bare-handed. Moreso, these catching gloves are specifically designed to help them stop and catch the ball efficiently, providing the field with fast and decisive plays that will surely bring the crowd to the edge of their seats. 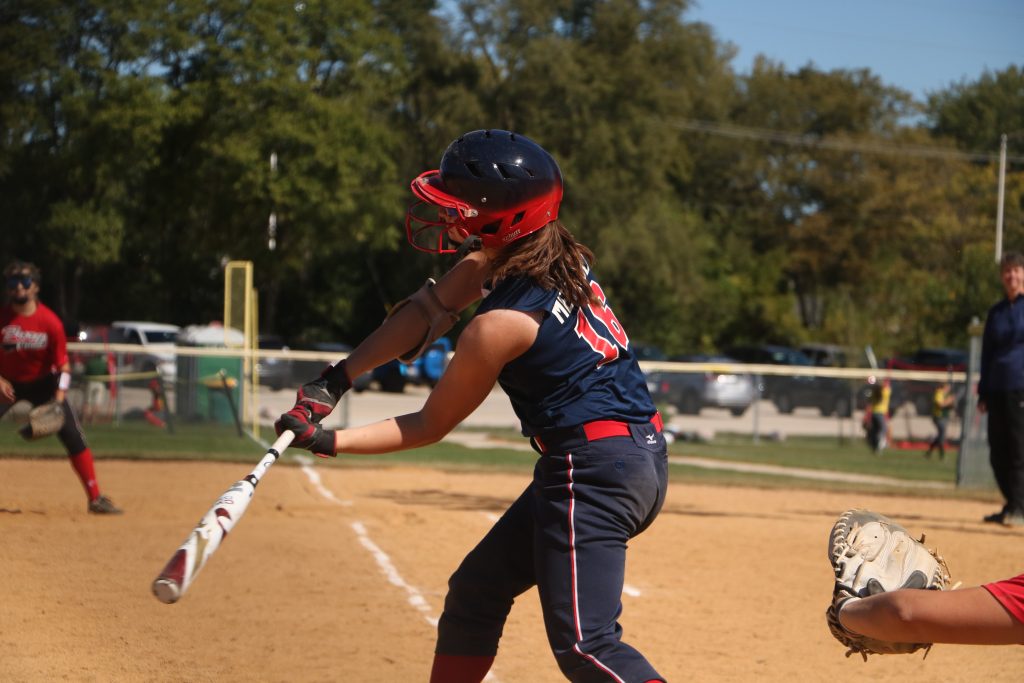 A softball batter’s equipment is more than a softball bat. A batter requires protective pieces of equipment for them to perform their role efficiently.

A batter can opt for maximum hand protection with softball batting gloves. It is not a required piece of equipment, but it has gained popularity in the softball community in recent years. A pair of softball batting gloves can protect a batter’s hands from the vibration that comes from hitting the softball hard. In addition, softball gloves help minimize blisters on the batter’s hands from gripping the bat for extended periods.

Another essential piece of batting equipment is a softball batting helmet. In softball, wearing a helmet is required when hitting the ball. This batting helmet protects the head of players from receiving the full impact of a softball. This equipment is most crucial in slowpitch softball games. The pitch in slowpitch travels in an arc, causing possible injuries when pitched at the wrong angle.

Of course, a batter’s equipment won’t be complete without a proper softball bat. There are two variants of softball bats— a fastpitch bat and a slowpitch bat. A fastpitch softball bat usually features a one-piece or two-piece construction depending on the needs of a batter. A one-piece design fits a batter who can swing hard, transferring more force to the ball with more speed and power.

On the other hand, if a batter lacks the strength required by a one-piece bat, the two-piece constructed bats come into play. A two-piece softball bat features a separate barrel and handle construction, enabling it to flex during a swing, unleashing more force to the ball through a trampoline effect.

Since fastpitch softball games are closely similar to traditional baseball, both games implement almost identical strategies. One common strategy used in both games is bunting. A bunt is where the batter intentionally restricts the swing and contact of the bat and the ball. This restriction limits the impact between the bat and the ball— sending the ball within the infield. Bunting is a strategy done for the batter to reach the first base immediately. Furthermore, sacrificial bunts could also be done where the batter bunts the ball— letting another baserunner advance to another base or make a run for the home base.

However, bunting is a different story in slowpitch softball games. In softpitch softball, the rules oblige the batter to exert a full swing to the ball, making bunting illegal in this type of softball game. In addition, an umpire can rule a bunt as a poorly hit ball even though that was the batter intended to play.

In the case of fastpitch softball games, since the game’s central idea does not revolve around scoring high in games, an authority can call on a mercy rule on the losing team if the winning team leads by eight runs within five innings.

Stealing is different between fastpitch and slowpitch baseball. The rules in fastpitch games state that base runners can move as soon as the pitcher launches the ball. Furthermore, these rules state that fastpitch player can attempt to steal as many bases as they want. However, if a runner takes off the base before a pitch, the authorities can send the runner out of the playing area.

On the other hand, stealing in a slowpitch softball game is a more complicated process. If a pitched ball lands on the home base, or if a runner gets hit by the ball, it’s considered a dead ball. Once a dead ball has been called, a base runner must come back to his original base. However, if the ball does not land on the plate or a catcher catches the ball, the ball is considered live, and the base runner may steal a base. Contrary to fastpitch softball rules, in a slowpitch softball game, a base runner should wait for the ball to reach the home plate or be caught by the catcher before they can attempt to steal a base.

In conclusion, even though both fastpitch and slowpitch are softball games, these two variants have a wide array of differences. The rules and way both games are played are far from identical! Fastpitch softball games utilize offense because of the way the softballs are pitched in their game. On the other hand, slowpitch games focus on the defensive side since pitches in slowpitch are comparatively easier than fastpitch. Despite these numerous differences, both games are great and worth playing!

Types of Baseball Cleats | You Should Know Before Buy Cleats

Metal vs Molded Baseball Cleats | Which one is Best?