Wiffle Ball: A Neighborhood-friendly Alternative to Baseball and Softball

The main gist of Wiffle Ball resembles the core rules of baseball, softball, and t-ball. However, a Wiffle game features modified bats, balls, strike zones, and playing areas to fit in an urban or indoor setting. Moreover, Wiffle’s rules and regulation makes it a great recreational game for friends and family.

The History of WIFFLE 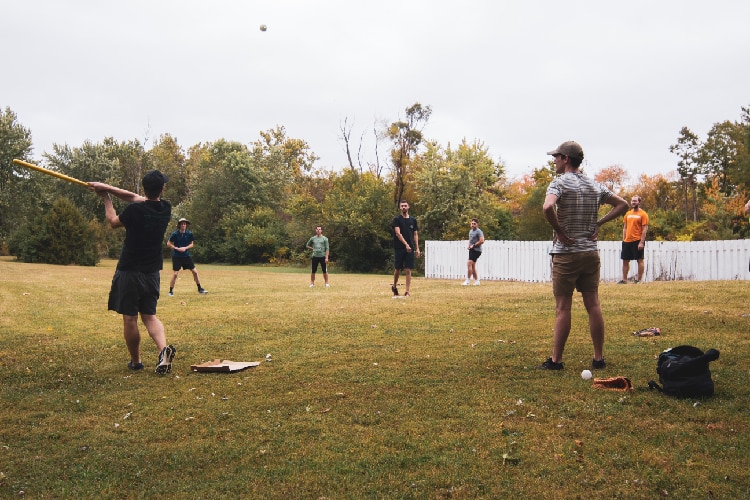 Before the wiffle ball became one of the USA’s most played backyard games, it was once first a concept. During the summer of 1953, David N. Mullaney observed his 12-year-old son playing in the backyard of their home in Fairfield, Connecticut.

At first, the children used a perforated plastic golf ball and a broomstick handle during their game to compensate for the small playing field and team composition. For days, the children continue to throw curved balls using the perforated golf balls. As a result, the children’s arms experienced immense stress and fatigue; thus, leading Mullaney to develop the first wiffle ball.

The first ball underwent various experiments using ball-shaped plastic parts from a nearby factory. After countless different combinations from their original design, Mullaney and his son settled with 8 oblong perforations.

Consequently, this design helps the wiffle ball to easily curve mid-air naturally without needing ball spin. In David Mullaney’s neighborhood, the term “wiff” is synonymous with a strike-out; thus, coining the term “wiffle”.

Seeing how much his son loves playing the game, Mullaney produced the first batch of wiffles. Eventually, the game caught on and became one of the most enjoyable recreational backyard games in the United States.

The Basics of Wiffle Ball Games

Although the wiffle game is a simplified version of baseball, the rules of the former are different from the basic rules of a baseball game. Aside from the rules of wiffle games, there are lots of variations between both games. Here are some of it:

In wiffle, balls do not travel much due to its perforated construction. As a result, this makes wiffle’s recommended playing area to be only about 20’ wide and 60’ long.

Here is a video explaining the basic field layout and rules of wiffle games:

Number of Players in a Wiffle Game 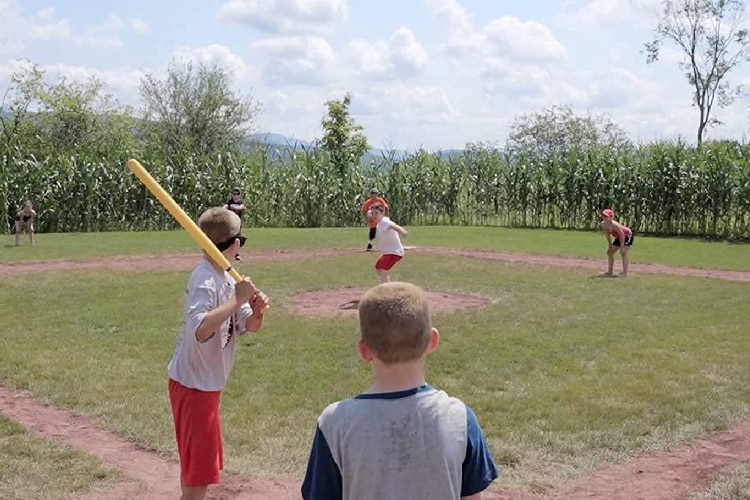 In a game of wiffle, the minimum number of players allowed is two; on the other hand, the maximum allowed is 10 (5-a-side). In the case of a full 5-a-side team, each side will designate the following positions on their members: 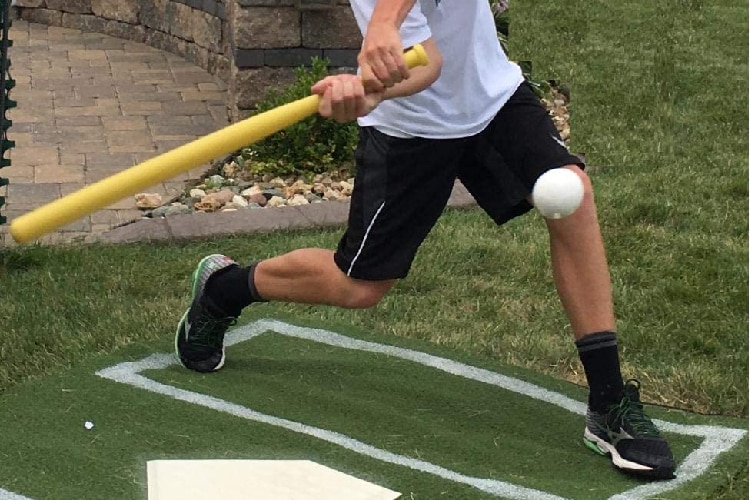 Although wiffle follows the fundamental standard of baseball rules, some modifications apply due to the game’s small playing area. In addition, an inning in a wiffle game won’t stop unless both teams have already batted. For an inning transition, the defensive team must generate three outs against the offensive team. Lastly, teams play against each other within nine innings per game.

On the offensive side, players utilize a wiffle bat to hit oncoming balls. If there are no wiffle bats available, batters may utilize an ordinary broom handle. However, batters cannot utilize regular baseball, softball, or fungo bats.

Similar to baseball games, offensive wiffle teams bat the ball from the box to score against the defending team. One of the main offensive differences between both games is that in wiffle ball, there are no base runs.  In addition, the scoring system of wiffle ball— which we will tackle later— is different.

The rules of wiffle vary from game to game depending on the set rules by the game’s officials. For instance, some games modify the number of strike-outs needed and sometimes don’t count foul-tips as the last strike. Nevertheless, these are the standard ways to generate outs against the offensive team in a wiffle game.

The scoring of wiffle and baseball games are fundamentally the same. Similarly, the offensive team tries to get as many bases as they can before the defensive team has the chance to switch positions. Therefore, in wiffle games, a 4-base point is considered a point— which is a home run. However, wiffle games do not have base runners in the playing area; instead, they use line-markings to identify the score per ball hit.

As stated, the length of a wiffle game’s playing area totals 60’. Therefore, the playing field’s total distance of 60’ is divided equally into three 20’ boxes. The number of bases a team earns depends on where the ball lands within these markers.

Starting from the batter’s box, each base point increases the further the ball goes:

What Should You Get for Wiffle Ball Games? — A Buyer’s Guide

For instance, wiffle ball games do not utilize regulation softballs and baseballs within their game. The main reasoning behind this is because cork-cored balls tend to break windows and damage other properties. Furthermore, since the playing area of wiffle ball is typically small; the construction of wiffle ball and bats complements each other to utilize space

Therefore, we advise buyers to buy the following for their wiffle ball games: 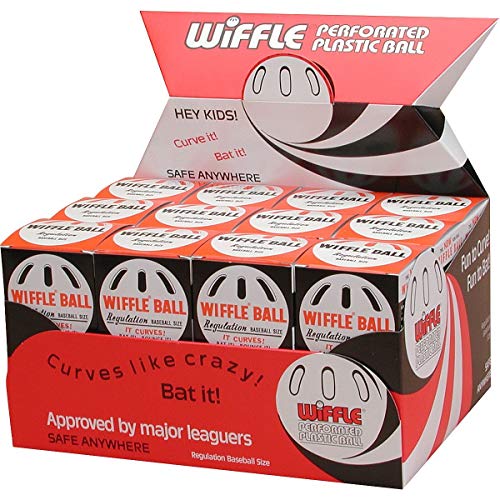 Of course, wiffle games won’t be as it is without wiffle balls. Typically, a wiffle ball won’t travel as far as regulation baseballs and softballs; thus, making them perfect for small playing areas. In addition, these balls feature eight ¾” perforated holes on the ball’s surface, allowing the ball to spin with minimal effort.

The recommended size for a wiffle ball must be between 2.87” up to 3.15” in diameter. On the other hand, the average weight of these balls varies around 2/3oz. Therefore, this makes wiffle balls extremely lighter and smaller compared to a baseball.

Furthermore, a wiffle is an extremely lightweight game ball which is the complete opposite of weighted baseballs for hitting practice. Therefore, we do not recommend using them for hitting training sessions. 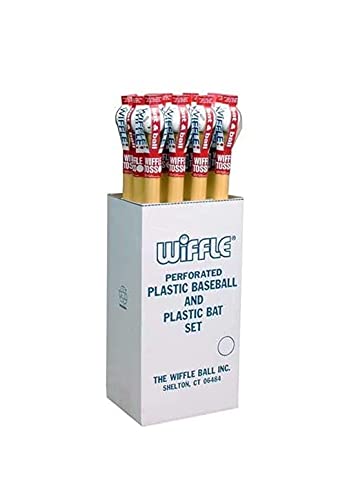 Batters utilize a bat specifically designed for a game of wiffle. These wiffle bats feature a diameter not exceeding 2.75”. Moreover, the maximum length allowed for a wiffle bat is 42” while weighing no more than 1kg (36oz).

If a wiffle ball bat is not available, players can utilize a broom handle as a bat. In addition, players cannot utilize other types of baseball bats in a wiffle game. Doing so may alter the performance or trajectory of a wiffle ball, making the game unplayable and unfair against the opposing team. For instance, using a regular baseball bat may constantly lead wiffle balls behind the third base As a result, offensive teams will always score a home run in every batting opportunity.

Therefore, we advise players not to stray away from a wiffle ball bat or a broom stick when playing wiffle games. 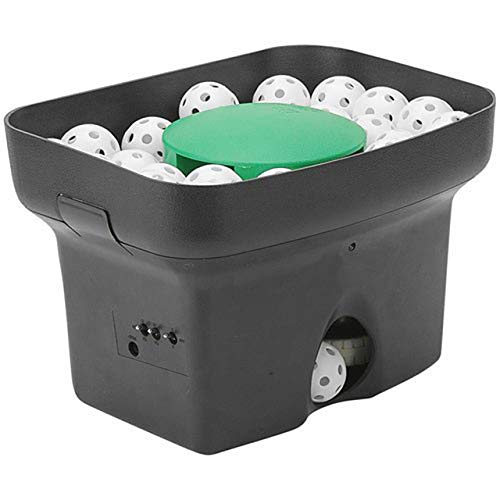 Firstly, a wiffle ball pitching machine’s capacity will determine the number of balls it can contain all at once. This feature is crucial for coaches and players who need to make their wiffle game practices as efficient as possible. In addition, a high-capacity pitching machine enables batters to have an uninterrupted batting session without having to refill the machine within intervals.

Secondly, the speed and spin adjuster helps batters with their reaction time when hitting various ball curves. In addition, these two features help in terms of ball tracking, which is a vital skill for a batter to have. Therefore, these two feature is a must with wiffle ball pitching machine. 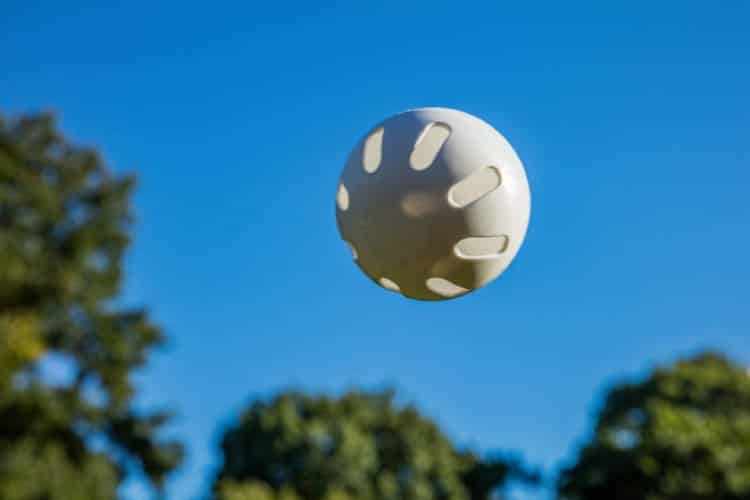 However, even though the nature of wiffle games is non-competitive, people can still buy the essential gears to up their game performance a notch. Therefore, we recommend players have a wiffle ball, bat, and pitching machine for both their playing and training needs.

Q: What is Wiffle Ball used for?

Wiffle balls feature a perforated plastic surface and a hollow core. Moreover, a wiffle ball game is usually held in backyards and indoor settings where a regular baseball can damage various objects. Therefore, wiffle ball games utilize these balls because of their lightweight property, making them suitable for indoor and residential area use.

Q: Why do they call it a wiffle ball?

The founder of Wiffle Ball— David N. Mullaney— used the word “wiff” as the basis of his company’s name. This word means a strike-out from his hometown; thus, coining the word “WIFFLE”.

Q: How is wiffle ball different from baseball?

A wiffle ball features a plastic-crafted ball with 8 perforated holes and a hollow core. In addition, the typical size of these balls falls between 2.87” up to 3.15” in diameter while weighing only 2/3 oz. Thus, this makes them 8x lighter than regulation baseballs.

Q: What age is wiffle ball for?

There is no age requirement for a person to play wiffle ball. As long as they can handle a bat and throw a ball, they can partake in this game. There are wiffle games on both the Little League and professional scene— also known as the MLW Wiffle Ball.

Q: Can you steal bases in wiffle ball?

No, in wiffle ball, the numbers of bases acquired in every inning are determined by the zones where the ball lands. Therefore, there is no way the defensive team can steal bases off the opposing team.

7 of the Best Left Handed Baseball Gloves in 2021 Reviewed

Excellent Baseball Gifts for Boys: 8 Budget-Friendly Products for You!

8 Baseball Rebounder Nets: Hone Your Fielding Skills By Your Own Today!

Baseball Duffel Bag: 6 Excellent Bags for both Storage and Transportation