Don’t know the differences between slowpitch and fastpitch bats? You are not alone. Most players who are still learning the ropes of softball may have the same question. But the fact that so many people have this query doesn’t mean that its answer is complicated.

Fastpitch bats are lightweight, balanced, and provide a quick reaction time. They allow the batter to dispatch balls coming in at blazing fast speeds. That isn’t the case with slowpitch softball bats. These bats are heavier, with their weight concentrated at the barrel. This enables them to generate greater power.

Having said that, the differences between slowpitch and fastpitch bats aren’t just limited to their weight. Both these bats are worlds apart when it comes to their shape, length, the length of their sweet spot, and even their cost.

Read on to know more about these and other differences between slowpitch and fastpitch bats.

Here are critical differences between slowpitch and fastpitch:

Differences between Slowpitch and Fastpitch bats

Here are the differences between slowpitch and fastpitch bats:

Ø  Shape of the bats

Do you know why fastpitch bats tend to be lightweight than their slowpitch counterparts? Because they have a narrow and streamlined design, with little deviation between neck and barrel.

That isn’t the case in slowpitch bats that boast a larger barrel and, by extension, a bigger sweet spot. This increases the likelihood of the bat coming into contact with the ball and imparting greater power to it.

Most slowpitch bats you see on the market measure about 34-inches in length, give an inch or two. That makes them longer than fastpitch bats, whose length ranges between 26 inches and 34 inches.

The extended length of slowpitch bats is necessary as their batters are more inclined to ‘touch’ the ball than ‘hitting’ it, which is the preferred choice of fastpitch batters.

Wondering why fastpitch bats tend to be lightweight? The speed of the incoming ball is to blame. Fastpitch players need to have a quick reaction time, or else the ball coming in at a high speed would simply whizz past them.

Slowpitch players don’t have to be as quick and can therefore make do with heavier bats. Such bats may take more effort to swing, granted, but they’d also allow the batter to hit the ball more powerfully.

Low-end fastpitch and slowpitch softball bats cost about the same. That’s because the grade of wood used in either isn’t much different from the one used in the other.

However, when it comes to better options, high-end fastpitch bats always cost more. This is due to the fact that they use advanced technology to maximize the ratio between their weight and performance.

Slowpitch bats, due to their heavier weight and extended reaction time, are a must-have for ‘power hitters’. These are batters with strong forearms who like to bunt the ball out of the ground at every chance.

Fastpitch bats are more suited for ‘contact hitters’, or those batters who prefer staying on the crease for as long as possible. That they manage to do by using their bat to make contact with the ball, but without swinging their bat.

Following are the best fastpitch bats currently on the market: 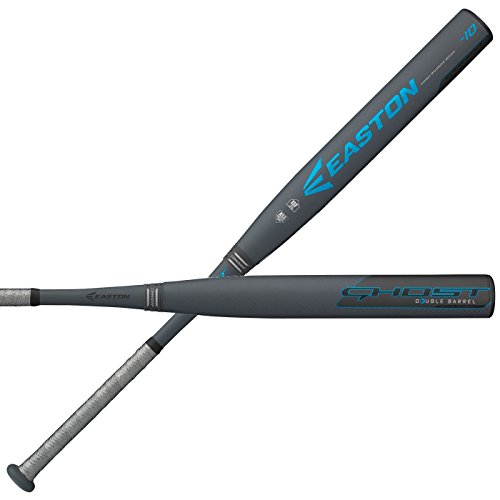 Most fastpitch softball bats that you see on the market don’t cost a lot. That isn’t the case with the Easton Ghost -9 ASA. It costs as much as two of your average softball bats. But it still manages to have a decent following. Know why? Because of its high-end features.

Start with the double-barrel construction. Aside from giving this model the ultimate combo of feel, pop and sound, it also provides it with a massive sweet spot. Equally useful is its XTX Matric technology which has allowed this bat to boast a brilliant combo of durability and flexibility.

Then comes the NITROCELL foam. It helps forge a better connection between the handle and the barrel, thereby minimizing chances of things going wrong. All these features are probably why this bat is approved for play in ASA, NCAA and ISF.

Can’t afford the astronomical asking price of Easton Ghost -9? The Louisville Slugger with its affordable price tag and a set of high-end features is then a must-have for you. Here is a bat whose maple wood construction allows it to transfer high energy from the bat to the ball.

Yet another thing that maple does is prevent this bat from flaking. There is little chance of wood rings separating from each other, even in the aftermath of tens of mis-hits. You also get a cupped handle to easily control this model’s movement through the air.

You might find it good to note that this bat has a natural finish. Louisville has done nothing with the maple wood that would give it an artificial feel. Though the fact that it doesn’t come with a warranty leaves a sour taste in the mouth. 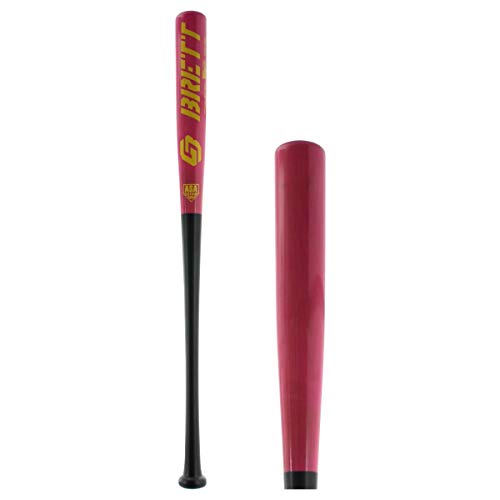 Both of the bats you saw above are made of 100% wood. This model is different. Its manufacturer has relied on a combo of a wood barrel and reinforced fiberglass handle. And this arrangement hasn’t been without its merits.

Begin with added strength. Those of you who’re in the know might be aware that fiberglass handles are known for their sturdiness, as there’s little chance of them getting damaged. They also weigh heavy than their big counterparts, a huge reason why this bat is lightweight.

To cast the net for its potential users as wide as possible, the GB5 is available in three sizes. All of them have the same 2 ¼’’ barrel that we love but have different lengths and widths. That’s what makes this bat suitable for a wide range of audiences. 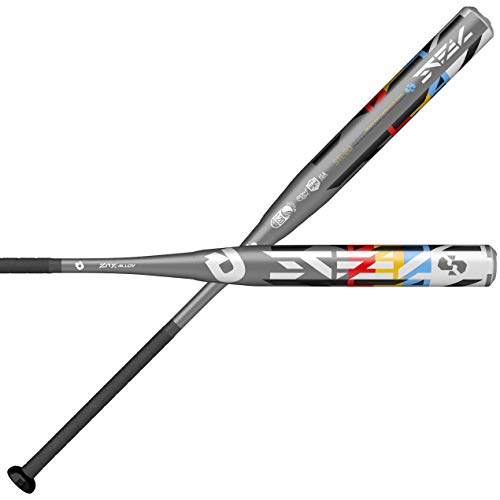 Looking for a bat that provides a reactive and stiff feel? Then you mustn’t take the DeMarini Steel All Association Slowpitch Bat for granted. It is made from a combination of alloy materials that have been crafted to enhance its performance and provide a long-lasting barrel.

You won’t have to worry about the flex index with this bat. DeMarini has taken care of that issue by providing this model with an aluminum alloy handle. One which lowers the whip produced by the bat and adds consistency and power to every shot.

Yet another milestone that the combo of aluminum and zinc in the bat’s handle has been able to achieve is to extend its durability. That it has done by ensuring every hit is flush with the sweet spot, thereby reducing chances of mis-hits chipping away at the bat’s sturdiness.

The Worth EST Hybrid defines what it takes to set the trend in a class of slowpitch bats. It has taken the market by storm since its release all those years ago and shows no signs of any decrease in its popularity. The length options, barrel size and swing weight make it appropriate for almost every hitter.

The price point, affordable as it is, doesn’t mean that this bat’s manufacturer has cut any corners. You can be sure of that claim once you measure the exit speeds of balls leaving this model. The distance they’d cover – both horizontally and vertically – will lay to rest any doubts you may have about this bat.

That isn’t to say that it offers nothing for contact hitters. It boasts a 100% carbon fiber barrel whose lightweight construction makes it a cinch to swing this bat. That is how it makes sure that, on most occasions, you’d be able to make contact with the ball. 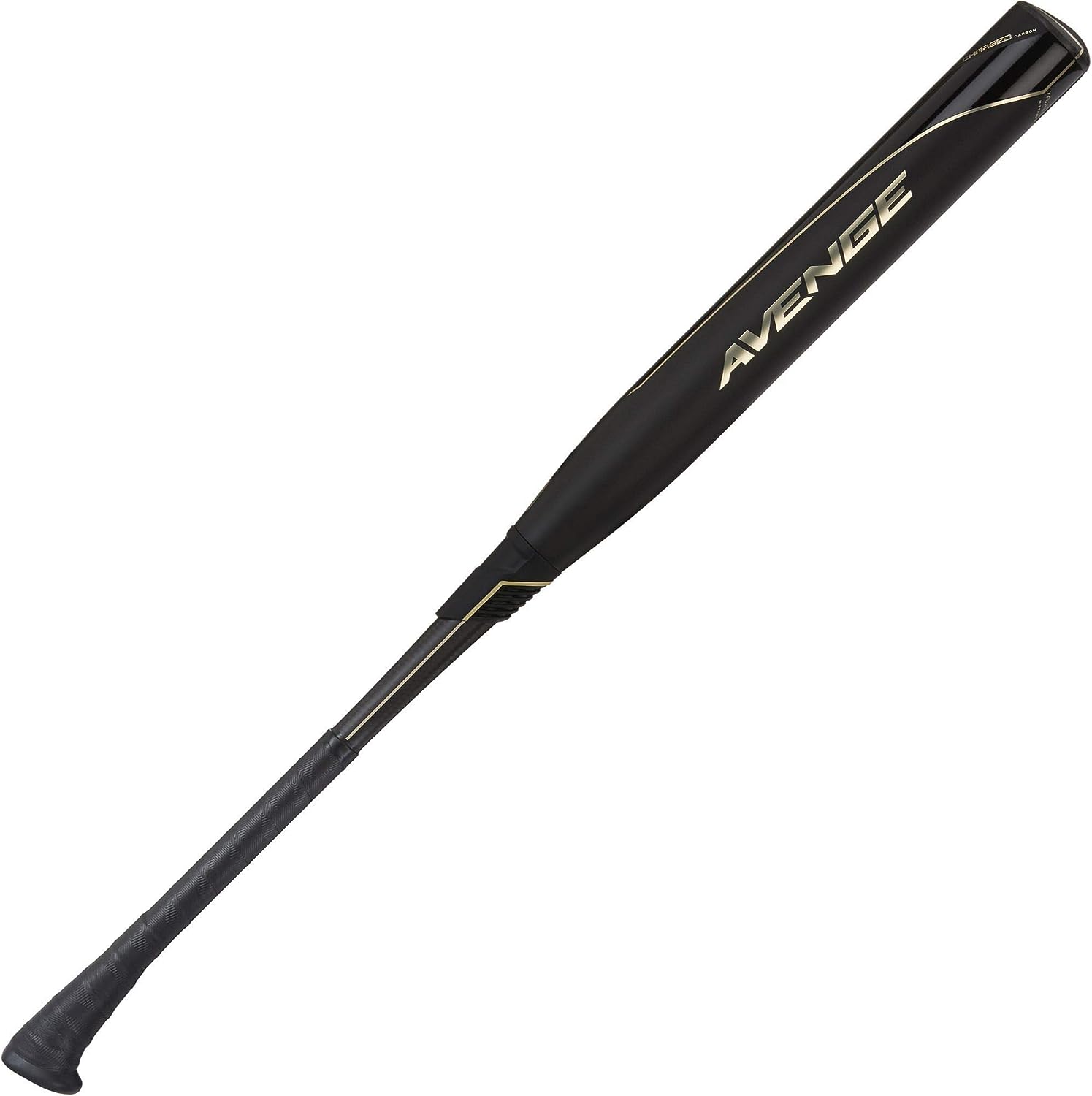 Multiple features of the 2020 Axe Avenge make it a must-have. Foremost among them is that it offers the players the choice between an end-loaded swing weight and a balanced one. Then there is the ‘Variable Layer Tech’ which engineers barrel walls to maximize the power and size of the sweet spot.

Equally useful is its Tri-Flex technology which enhances this model’s whip as you’re swinging it. All these characteristics are taken to a whole new level with its ‘Low Profile HyperWhip Composite End Cap’. And the Vibration Canceling system ensures that your hands get zero unpleasant feedback.

To further sweeten the deal, its manufacturer has used Power Gap technology to make this bat compliant with ASA rules. This technology has supplemented the barrel with a double-walled design that is allowed in USSSA leagues too. What more can you ask for.

Don’t have the time to read everything in detail? Here’s a summary explaining the differences between slowpitch and fastpitch softball bats. The former category of bats tend to be heavy, have relatively long barrels and are best-suited for power hitters.

That isn’t the case with fastpitch softball bats. Their lightweight construction, fast swing speed and bigger sweet spots make these models a must-have for contact hitters, or those batters who like to stay on the crease for longer periods.

Best Batting Helmet with Faceguard In 2021

5 Best The Goods Bat Reviewed: Lightweight Feel and Power within a Bat

9 of the Best Bat Grips Reviewed: Bring Your Swing Game to its A-Game!

DeMarini Voodoo One Series: Power Within a Lightweight Bat